Library has resources to help you find a job: keyword searching for a job, career, resume

Your question is how to find, or what keywords or search terms are relevant for your need, right?

Here is a sample of how libraries try to help you:

Find Books:
Use the following words to search the
Library catalogue by Subject or Keyword.

What is a Keyword or Search Term?

A keyword is a word used to search an electronic resource in order to locate results that match that word in a specified part or in any part of the item, such as the title or in the full text.
When searching in digital environments, such as a library database or on the Internet, it is most effective to use single words (keywords) or phrases (terms).
Never type in a long sentence, such as a question or a thesis statement.
Instead, enter in a single keyword or term in the search box. Or, click "Advanced Search" for more search boxes then type in additional keywords and terms

This introduction to library research explains how to choose a topic, develop a research question and search for resources online, in the LLC and in the library database collection.

More help: The words you use to search for information are very important.
To begin, underline the main topics in your research topic or question and think of related terms and concepts. For example:

Extract:
... Just as Christians are severed into countless sects and denominations, so are Muslims.  In the same way that Catholics and Protestants differ and vary in some fundamental beliefs, so we shall find among the Muslims of the world...

... Muslims vary in their practice and understanding of Islam, they vary by region and culture, they vary by educational level, race and economics, and their interpretation and practice of Islam is influenced by political and social stability or the lack thereof.  Can someone say that Irish Catholics and Mexican Catholics are identical?  Are Russian Catholics the same in their practices as some Catholics in the Philippines, who practice flagellation and crucifixion every Easter?  It would be just as inaccurate, unproductive and unfair to generalize saying Sunnis believe such and such, or Shiites believes such and such.

Now, how does this relate to Canada?  And the Western world?  In the same way that the understanding and interpretation of Islam differs from one place to another, we as Canadians need to have our own unique Canadian-Islamic identity.  When people import the interpretations of Islam from other nations, they do not necessarily apply in a Canadian context.  And even when we say Canadian, even in this we cannot generalize.  To which Canadian culture do you refer?  Mohawk? Inuit? Quebecois?  Franco-Ontarian? Newfoundland? Prairies?  It is for such a reason that the Qur`an says, “And we have created you into various nations and cultures, so that you may come to know each other’s differences, strengths and shortcomings and to respect and love one another despite these differences.” continue reading

Posted by M Taher at 11:34 PM No comments: Links to this post


Extract:
Andrew Griffith, a retired senior official at Citizenship and Immigration Canada, has just published a book about the tense period beginning in 2007 that saw minister Jason Kenney bring a tidal wave of change to two federal departments. Among the many virtues of Griffith’s book, Policy Arrogance or Innocent Bias: Resetting Citizenship and Multiculturalism, is a striking commitment to epistemological modesty and self-reflection.
Throughout his case studies of various policy issues, Griffith underlines how officials working on multiculturalism and citizenship issues under Kenney were forced to confront their own latent ideologies and grapple with challenges to their expertise under a regime that broke starkly from the approach of previous governments. Continue reading Toronto Star

Posted by M Taher at 8:41 PM No comments: Links to this post

Extract:
... The newly released numbers from the 2011 census reveal a wide, demographic chasm between the nation’s poor — those whose annual income falls well below the $27,000 median figure for an individual— and the richest in Canada....

Toronto is also home to huge disparity in wealth, as well as many of the people in the lowest brackets, who rely on government more than middle- or top- earners do for their income. Employment is the major source of income, for instance, for the top half of the population, representing between 55 to 84 per cent of the money coming into the house. For people in the lower brackets, employment only accounts for 40 per cent of their total income.

On the same shelf:

Posted by M Taher at 5:05 PM No comments: Links to this post

Some newcomers are ruining the very programs meant to help them

PS. You think you know everything about newcomers, eh?  Not sure, then read the following stories to know the other side of the coin.

Posted by M Taher at 3:06 PM No comments: Links to this post

Among the world's most beautiful library buildings, two are Canadian, eh? @ mentalfloss.com

Source: 62 of the World's Most Beautiful Libraries, by Jill Harness @ mentalfloss.com

#27. Central Library of Vancouver, Canada
"Many modern building designs are based on historical icons, but few of these designs focus on the ruins rather than the original. The Central Library of Vancouver is an exception. Based on the Roman Coliseum, this massive building takes up one full city block and features not only a library with 1.3 million reference materials, but also retail shops, restaurants, a parking structure, office buildings and a rooftop garden.

#28. Library of Parliament, Canada
"The Library of Parliament was once part of the city’s original Parliamentary headquarters constructed in 1876. The building had been under construction for ten years before it was revealed that the builders didn’t know how to create a domed roof as seen in the plans. To get around this issue, the Tomas Fairbairn Engineering Company of England was commissioned to create a pre-fabricated dome. As a result, the building had the distinction of being the first building in North America to have a wrought iron roof. The unique Gothic building is so iconic that today it is even featured on the Canadian ten-dollar bill."

+ In the same list of 62 of the World's Most Beautiful Libraries, by Jill Harness @ mentalfloss.com

#40. Braddock Carnegie Library, USA:
"The first Carnegie library in the U.S., this library was designed in an eclectic medieval style by William Halsey Wood and opened in Pennsylvania in 1889. Only 5 years later, it received a Romanesque-styled addition, doubling the size of the building. At the time, it featured a variety of entertainment options, including billiards tables on the first floor, a music hall, a gymnasium, and a swimming pool. Additionally, it held a bathhouse in the basement so mill workers could take a shower before accessing the facilities. These days, the bathhouse is a pottery studio, but the tiled floors and walls remain.


Who is Carnegie?: Andrew Carnegie, a highly influential philanthropist and businessman, dedicated much of his life and self-made fortune to educational causes.

His strongest philanthropic initiative, driven by his strong belief in and passion for free education, was the creation of 2,509 free public libraries around the world. In total, he spent $2,556,600 on the construction of 111 libraries in Ontario and another 14 elsewhere in Canada. These funds contributed significantly to the development of literacy in small communities across this province. Learn more about Andrew Carnegie.

See on the same shelf:


Posted by M Taher at 8:50 PM No comments: Links to this post

Posted by M Taher at 12:44 PM No comments: Links to this post


The Foundation President, Dr K P Singh, who is a teacher at Delhi University and his Council, has decided to honor Dr. Mohamed Taher, Toronto with its Award for Professional Excellence (for 2012). 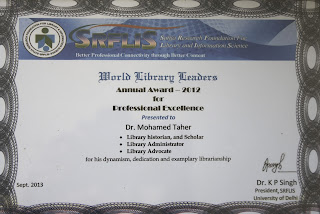 The Chief Guest Imam Malik Mujahid, Chair of Parliament of World Religions, visiting from Chicago, presented the Shawl. The Award Citation and Certificate were presented by Dr M P Satija.