Interested in being a Canadian? Here are a few handy tips. Happy Canada Day!

Thanks to Elizabeth Lee Rahman for sharing CBC Comedy's video.:


With 35 per cent of male newcomers returning home and a growing middle class in developing countries less inclined to migrate, an internal government review is calling the future of Canadian immigration into question.
“There has been a rather negative view of these expatriate Canadians, as they have been regarded as evidence of ‘brain drain,’ Canada’s lack of competitiveness in retaining high-skilled professionals and business leaders, and our insufficient success in integrating new arrivals,” the report noted. “Canada could choose to take a more proactive stance with expatriates.” continue reading


On the same shelf:


"We all have failures in our careers. But usually we keep quiet about it." This Princeton professor posted his CV of failures for the world to see. It includes sections titled "Academic positions and fellowships I did not get" "Degree programs I did not get into,"  "Research funding I did not get" and "Paper rejections from academic journals."  [source: cnbc.com] Continue reading: JOHANNES HAUSHOFER's CV OF FAILURES, 2016.


More on this shelf: 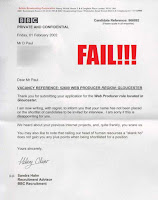 Bottomline: Resumes come in all shapes and sizes, and with all sorts of different content expectations depending on what positions your candidate has held, what industries they’ve worked in, and what countries they’ve gained their experience in. ... For example, did you know including ... even failures along with successes on your resume? [source: Assessing Resumes of New Canadians]

Best Practices in Today's Resume: Two Sides of the Coin


Who cares about resumes anyway? Think about it. Scott Thompson has a degree in accounting, not computer science. But, does it really matter what he studied as an undergraduate? He’s 54 years old, has been CEO of Paypal, and before that held high positions at Inovant, a subsidiary of Visa, and Barclay Global Investors. Clearly, he is qualified to run Yahoo.

Therefore, why do we have to “look good on paper” in order to be hired? As long as we know we can do the job in front of us, who cares about the past? A resume only highlights the past, but for all of those future thinkers out there, a resume is not required… [more at Resume: A Work of Fiction]

1. If your relevant experience, education, or skills are hard to find at a glance, your resume might as well be blank.
2. If it’s not immediately clear from your experience why you’re applying, no one will connect the dots for you.
3. If your resume is difficult to skim, it probably won’t be read at all.
4. If you expect to get your resume in front of a hiring manager, you need to first make sure you get through HR.
5. If your contact info isn’t correct, nothing else matters.  [more at Time.com]
Posted by M Taher at 2:40 PM No comments:

Mitigating obstacles and barriers for newcomers By Lori Jazvac

Extract:
Strategies for Career Professionals:
As career practitioners, we need to demonstrate genuine empathy and support in helping newcomers tackle this new milestone of change in their lives and career transition with zest, enthusiasm, and optimism.
What the career professional can do... Continue reading

WHY PERMANENT INDUSTRIAL JOBS ARE FAST VANISHING IN CANADA

BY CHRIS DEFONSEKA,The Sri Lankan Anchorman
Extract: There are four main sectors where any country will depend on for a strong and sustainable economy, the banking or financial sector, the educational system, the industrial or manufacturing sector and the services sector. All these areas are governed by politics. Good results needs sound political governance. Effective political governance for each sector individually is not sufficient. Since all four sectors are inter-connected, the priorities in order of importance should be right. Based on experience and evaluation of economies over a very long period of time, every country must have a sound industrial and manufacturing sector, backed by constant research and development. continue reading:


"That Canada is a land of opportunity is a hard sell for most immigrants who have had to bite and claw their way up. This is not just an expression of my bitterness at being told I’m not good enough, but the stark reality that almost all newcomers have had to face. While the Canadian experience card has shoved most out the employment door (the few who have made it are too insignificant number compared to the many who have not) or down the ladder that is not the only department in which the newcomers have been forced to eat humble pie. Talent is another one. "

"It’s time to stand up for and with newcomers to help them truly integrate and contribute to the progress of the country. Perhaps the government ought to insist (or provide incentives for) companies and employers hire a certain number of immigrants each year. Starting with government services. We’re more than just a vote bank!" Read the article


On the same shelf by Doug:
"Today, people like me are there, and the non-white, non-wealthy and foreign-born are on the edges, without much chance of grabbing the bottom rung of the housing ladder. (This is the division that led to the 2010 election of Rob Ford in Toronto: His backers, the non-white, non-wealthy, non-homeowning suburbanites, expressed their frustration with their ballots.)
If we don’t want the Canadian dream to be ruined by people like me, we’ll need to turn those inner-suburban districts into the sort of arrival cities we used to see downtown. We should take lessons from Surrey, B.C., which has allowed affordable basement and backyard “infill” apartments to flourish, or Toronto’s “tower renewal” zoning, which allows dense, high-intensity, multiuse districts to flourish between suburban apartment blocks." globeandmail


On the same shelf:

The Little Black Book of Scams, By Competition Bureau Canada

Concerned about elderly loved ones and fraud?

Give them a copy of the Little Black Book of Scams, a reference guide with information on common scams that target Canadians and steps on how to avoid them.

The Canadian edition of The Little Black Book of Scams is a compact and easy to use reference guide filled with information Canadians can use to protect themselves against a variety of common scams. It debunks common myths about scams, provides contact information for reporting a scam to the correct authority, and offers a step-by-step guide for scam victims to reduce their losses and avoid becoming repeat victims.
Consumers and businesses can consult The Little Black Book of Scams to avoid falling victim to social media and mobile phone scams, fake charities and lotteries, dating and romance scams, and many other schemes used to defraud Canadians of their money and personal information. continue reading: Competition Bureau Canada
Posted by M Taher at 3:18 PM No comments: